Another moto trip I took in August 2015, this time around California.  Since I’m just getting around to wringing about it now, I forgot most of the details.  Here is a terrible writeup for you to enjoy.

I left Los Angeles early in the morning and headed up the 395 to Bishop where I planned to camp for the night.  I got there way ahead of time, with plenty of daylight left; the riding was good so I kept pushing north.  How far will I go?  I ran into a storm cell just outside of Mammoth, CA. Luckily, I rode through it without getting too wet. 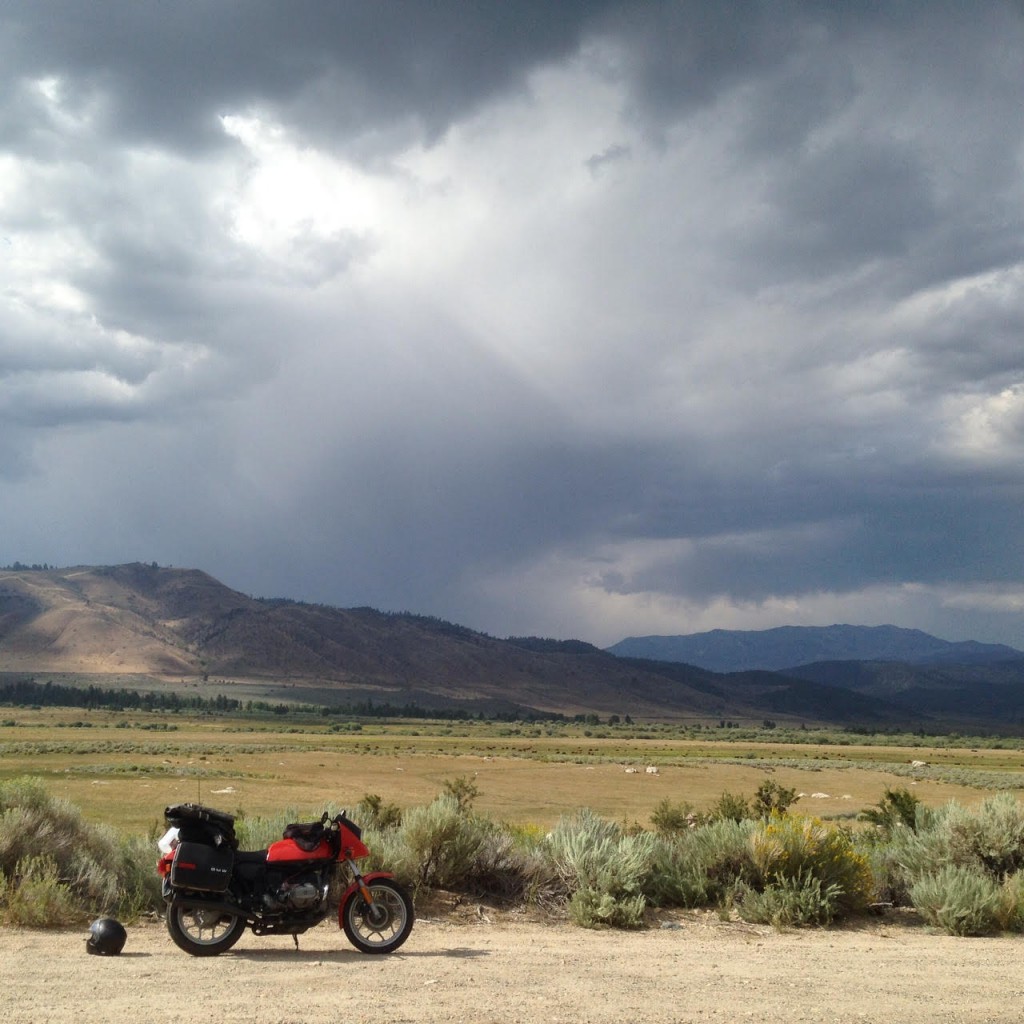 I ended up stoping at a state run camp site in Nevada, just outside of Reno for the night.  Almost a 500 mile day under my belt. (this might be as far as I’ve ever ridden in one day to date).  Unfortunately that storm I ride through caught up with me at the camp site, which brought high wind and a little bit of rain.  No problem though, The shitty $19 child tent I travel with on these types of expeditions was setup under a picnic table shelter.  I didn’t need to test it’s water resistance tonight which was a good thing. 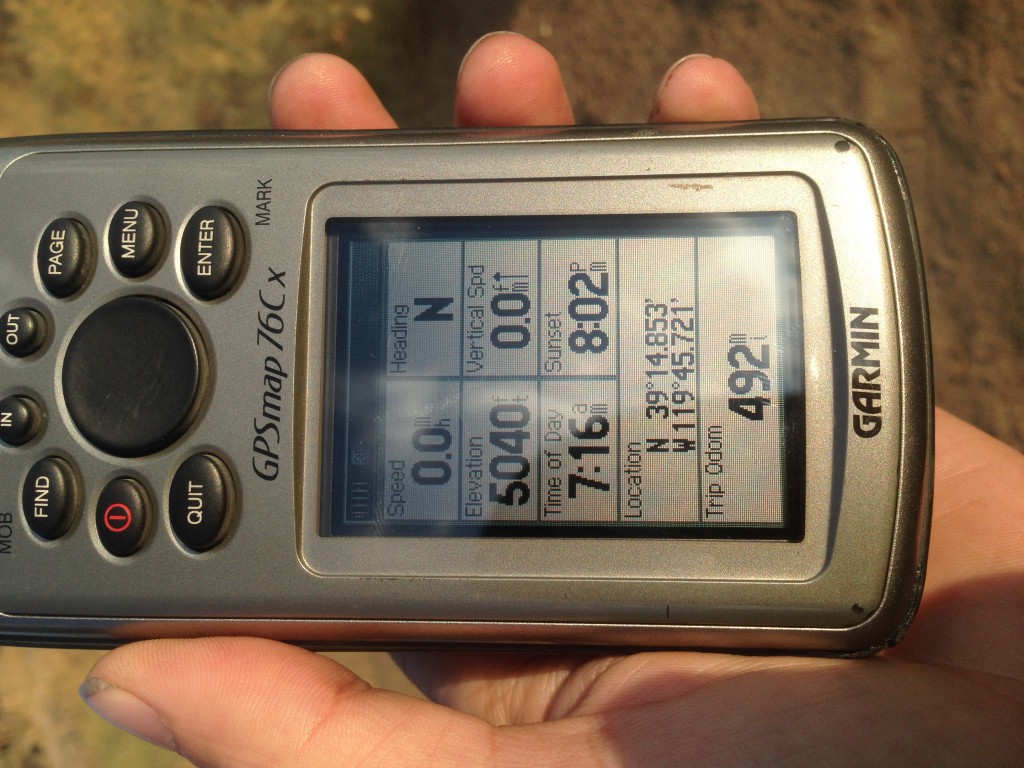 Wake up, make some breakfast and instant coffee and get back on the road… 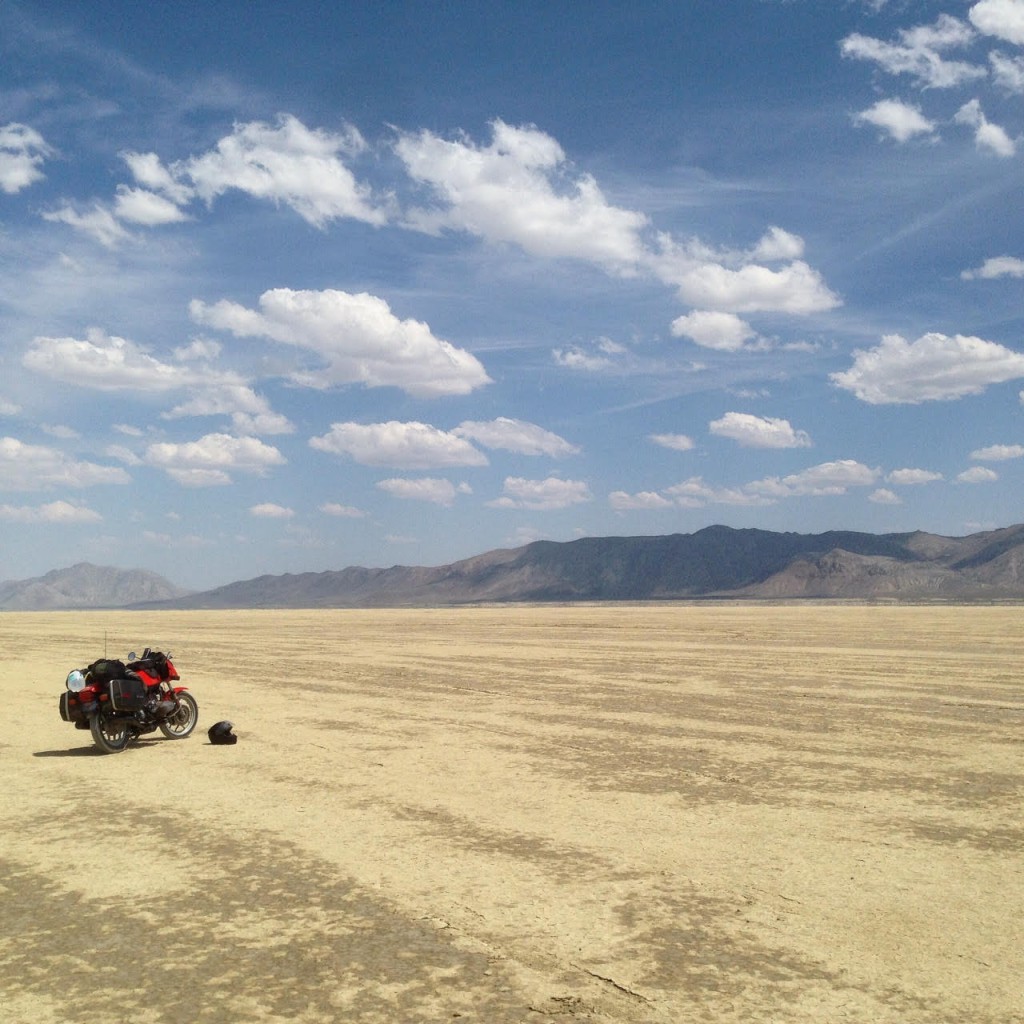 I rode out to the Black Rock Desert from my camping spot just outside of Reno.  Unfortunately, this was not very hard packed and the moto’s wheels felt like they were sliding all over the place.  I wanted to camp near one of the hot springs in the area, but I felt it was too dangerous to ride out there alone on this bike with the playa condition the way it was.  You really don’t want to break a leg out there, or have a mechanical because you’re probably going to die if nobody finds you.  As you can tell from the photo, the silty playa dust was a bit damp which makes things turn into a goopy mess.  I suppose they got some rain from the same storm I ran into the day before.

Riding north from Gerlach, NV on highway 447 was a treat.  I was quite surprised how quick and drastically the landscape changed.  The scorching hot desolate desert disappeared behind me and canyons of rock formations and trees appeared.  I found a small lake on private property with a sign allowing travelers to camp there.  Unfortunately I was in a riding mood and wanted to cover more distance.  I also didn’t take any photos. 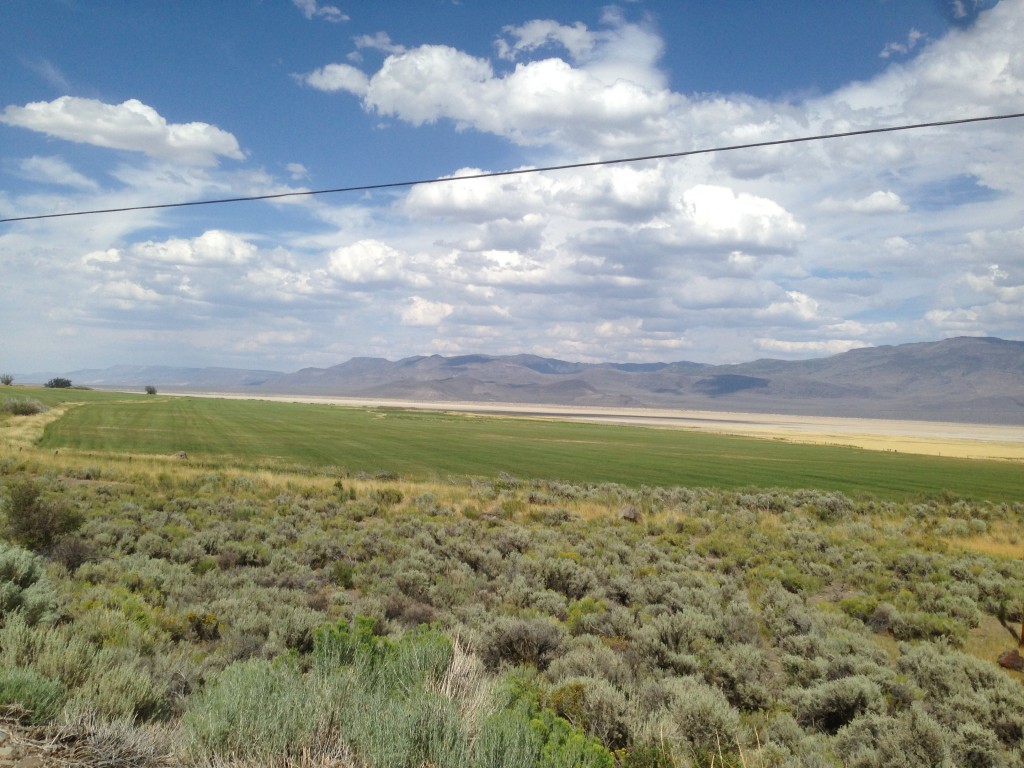 Riding back into California on the NV447/ CA1(?) was quite interesting for this city boy.  One room school houses, small churches where the farmers go on sunday, these small towns looked like an establishing shot of a movie.  Nope, I didn’t take any photos.  The picture above is of a small farm of some sort.  Lower Alkali Lake is in the background, which actually isn’t much of a lake.  I wanted to camp out there but I couldn’t find an access road.  It seemed like it was surrounded by farms. 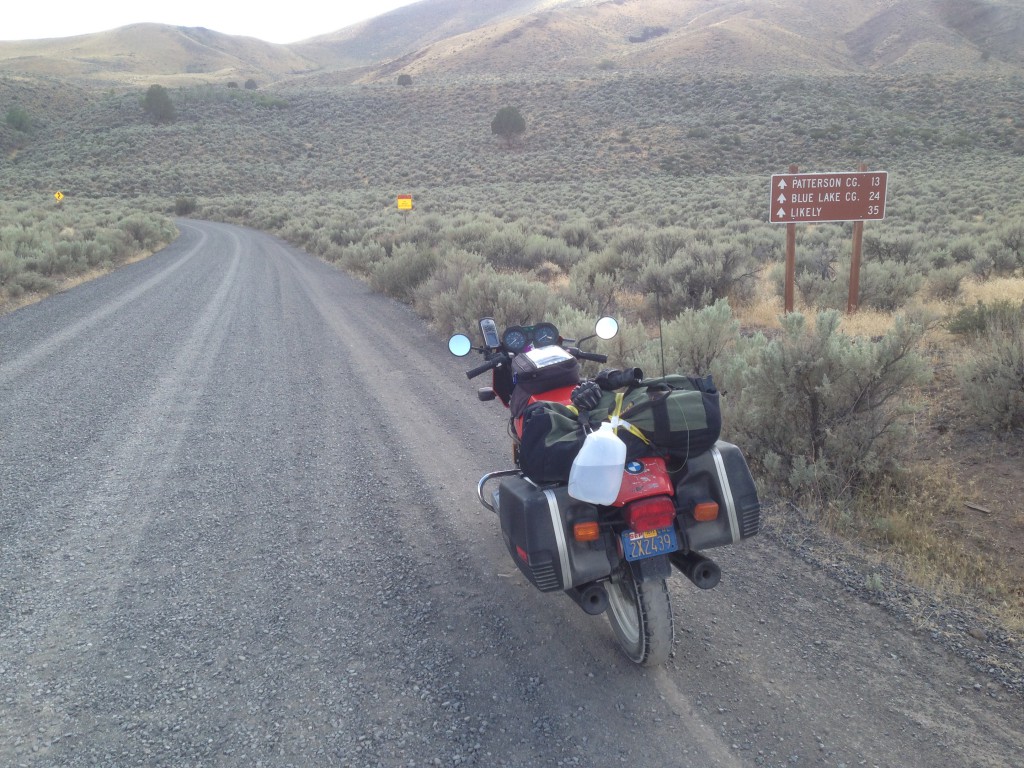 I wanted to get back to highway 395, and my GPS lead me here.  Nope, not going down this road.  My tires suck on this gravelly stuff.  There must be a better (paved) route over the mountain ridge.  Note to self; mount dual sport tires next trip. 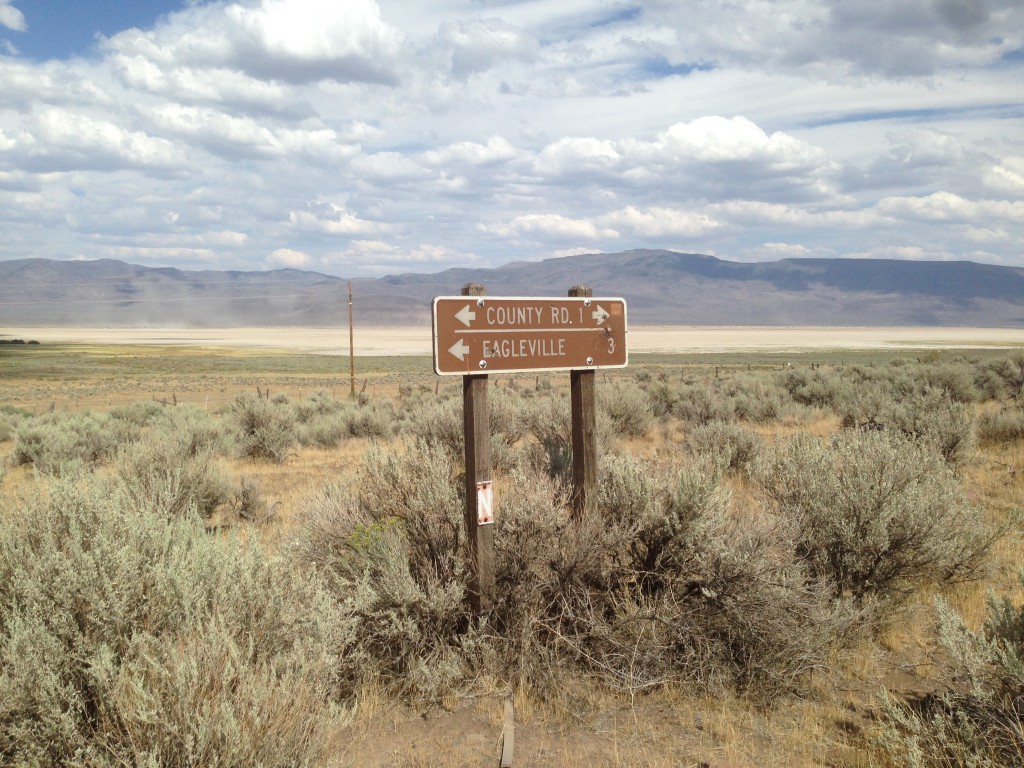 More small towns and picturesque farms passed my by as I rode through.  I missed the turnoff of the paved road somewhere.  Ooopps.  I have a policy where I don’t turn around on trips like this.  Fortunately it looks like there is another road going over the mountain on my paper map. 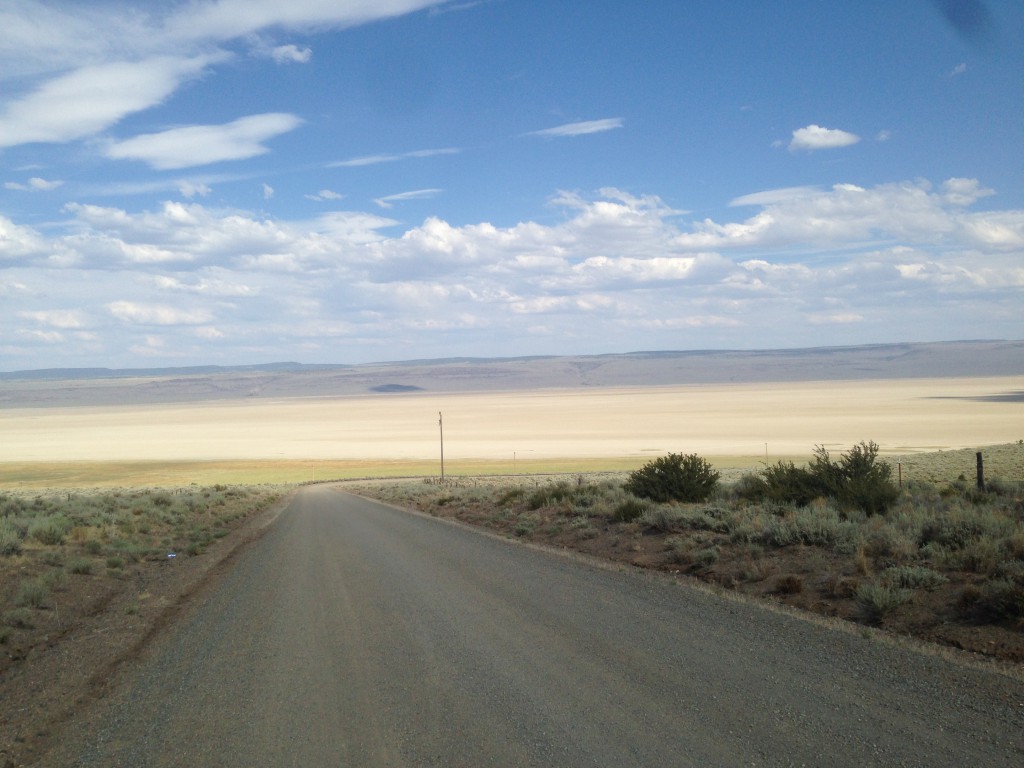 Yep.  It’s a crappy gravelly dirt road of unknown length.  Well, this is where I’m going if I like it or not…..  Upper Alkali lake in the background.  I really wish I could have found a access road to camp out on that dry lake bed.  :/ 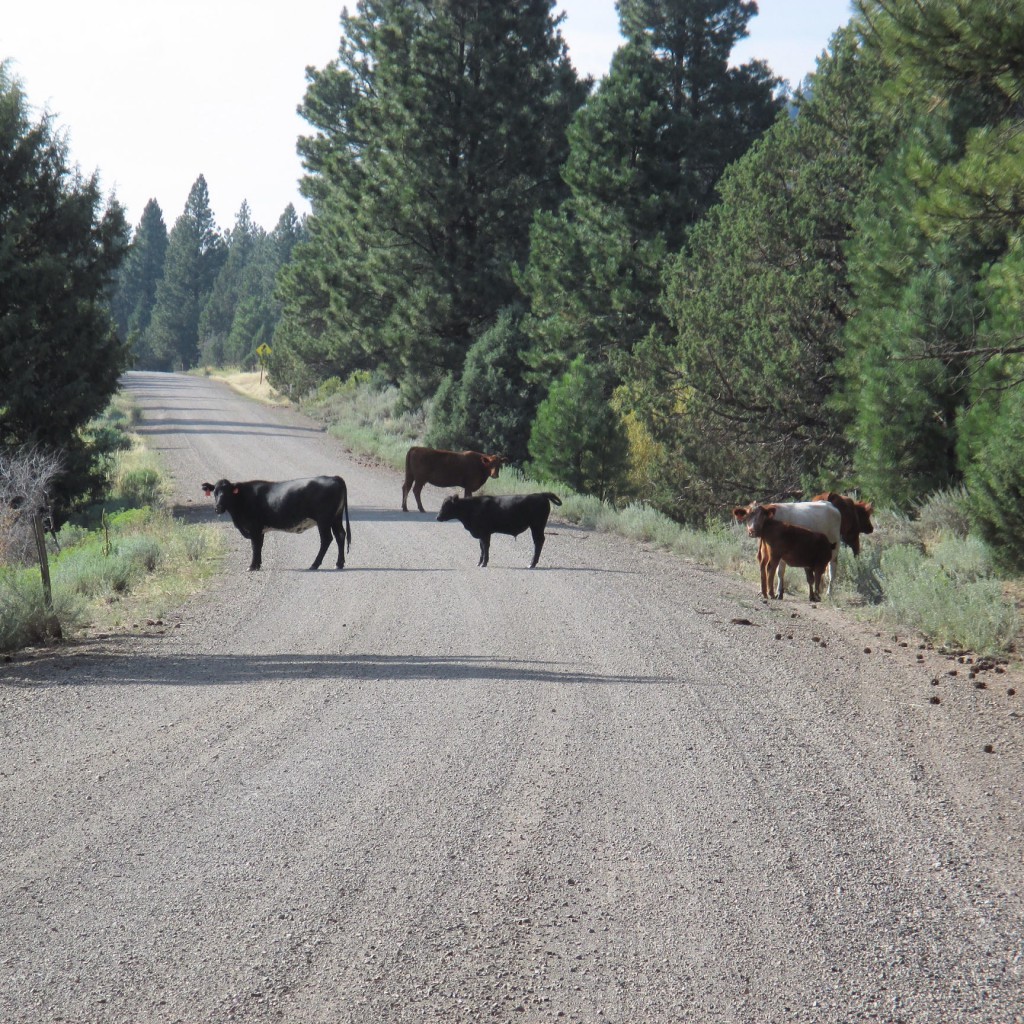 Moooooove!!  This turned out to be an open range, which is common up here I guess.  I was kinda freaked out by these guys honestly.  They were not moving…  If I get too close are they going to stampede me!?  I’m vegetarian!  I’m not going to eat you!!  Being a city boy, I only see these animals behind fences.  They eventually moved, which was nice. 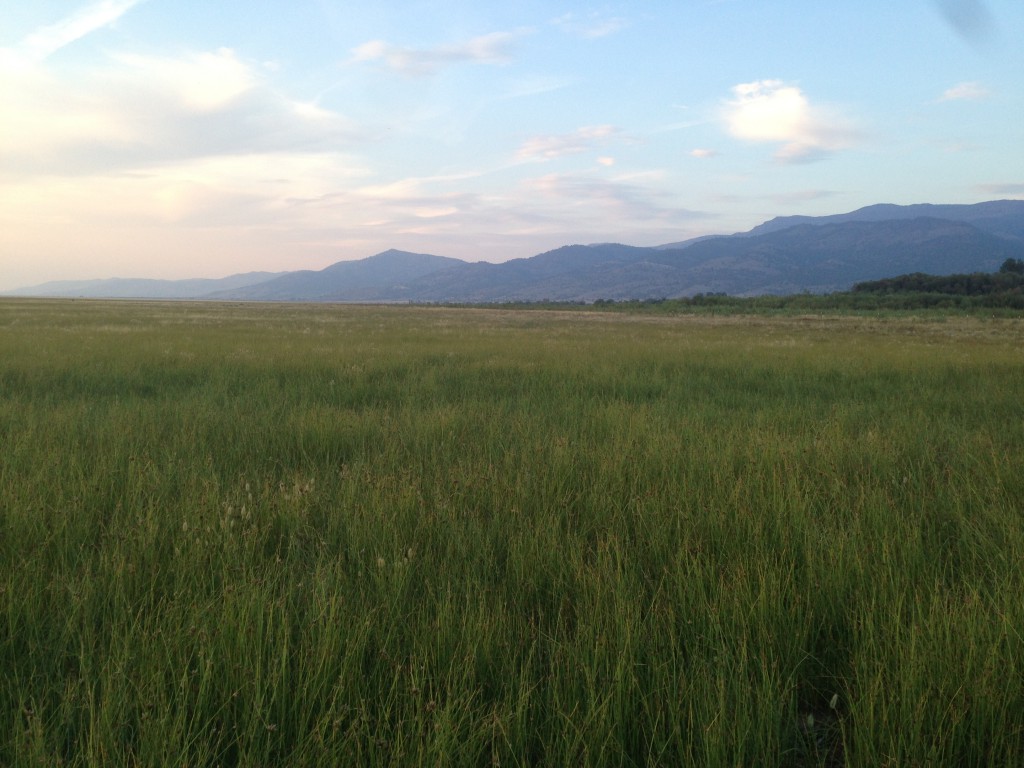 Surviving the gravel road on street tires, I found my way to another state camp ground at the California Oregon border.  The campground was situated next to Goose Lake, which was dry, full of cows, and tall grass.  I was pretty beat after the days ride, so again, I didn’t take any photos. 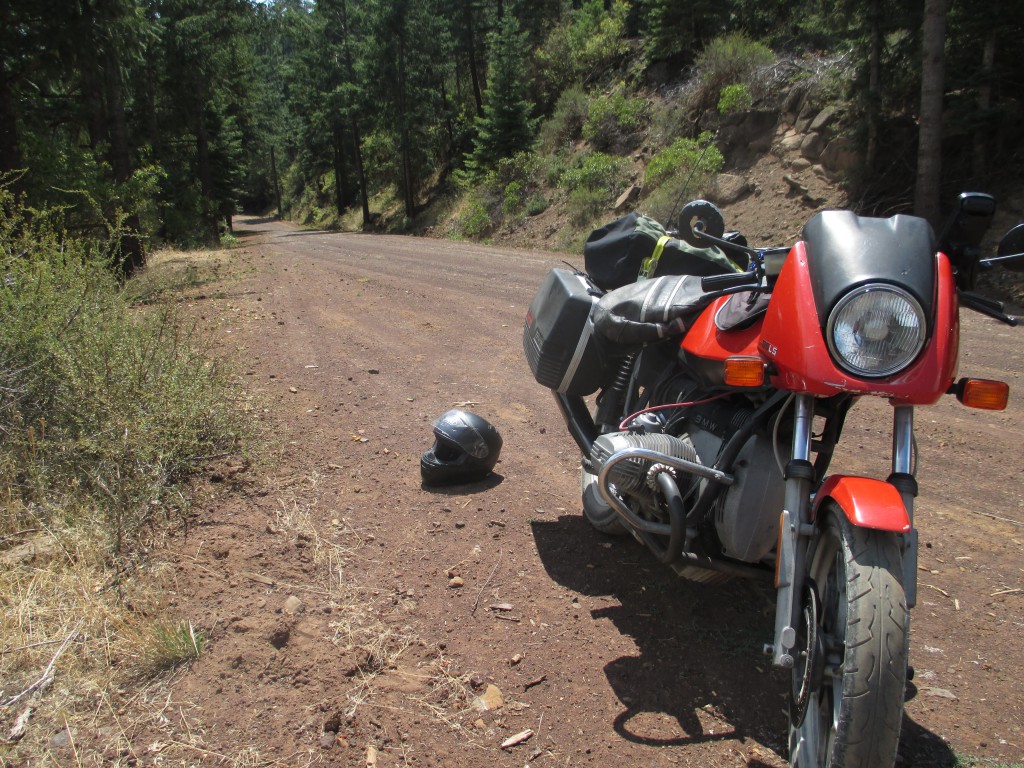 Okay, wake up, make instant coffee and some breakfast.  For some reason after a couple hours of riding I decided to turn down a random dirt road.  After a few miles I imagined running into groves of pot fields and white people with dreadlocks wearing Birkenstocks but instead I found a  breathtaking vista.  I attempted to make a QSO on 2 meter simplex. (For the hams, I also ran an APRS beacon the entire trip.  You find digipeaters in the strangest places) 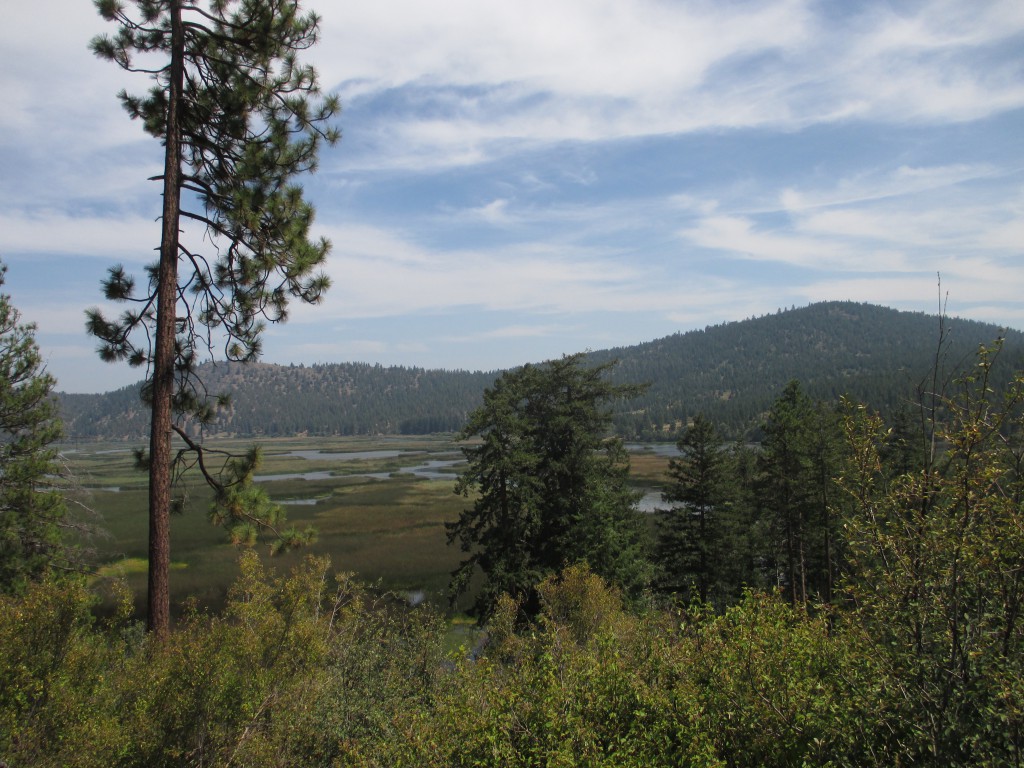 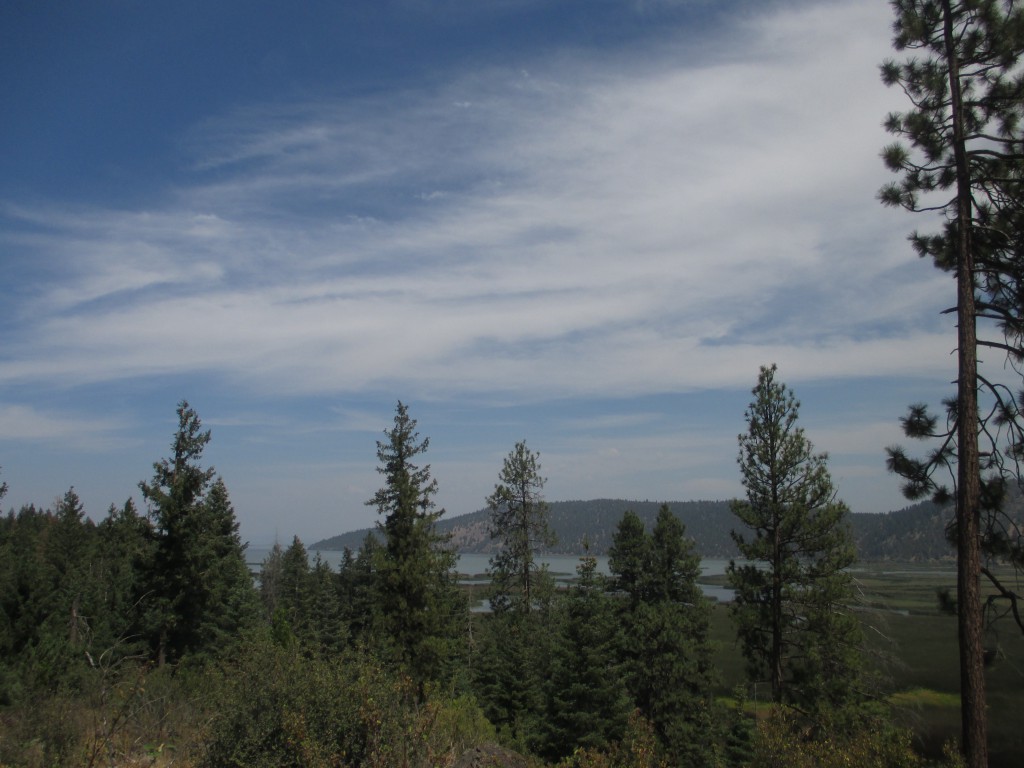 I think I just rode straight through Oregon to get back to the coast of California.  It was just more farmland, and fresh air.  It’s nice to enjoy a trip without having to “document” everything, ya’ know?

Alright, back in in California!  These Redwood trees are rad!  I love the twisty roads and the crisp air!  I ended up getting a hotel room in Crescent City because it was cold and foggy outside.  What wasn’t mentioned, was I bought a cheep-o sleeping bag for this trip that packs up into a tiny ball.  This was to save space.  It’s not warm, which is a big problem for me. 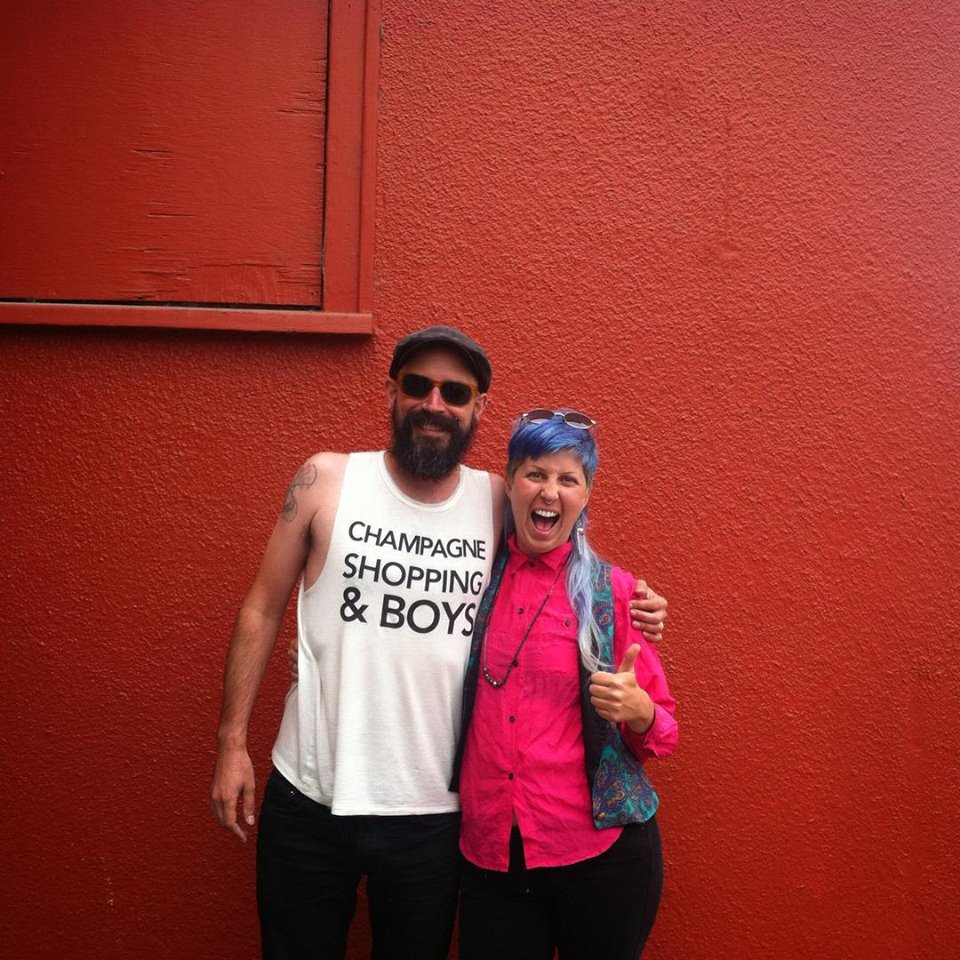 My Pal moved to a town about an hour south of Cresent City, so I had to stop by and meet up.  We always made loose plans to go moto touring but it never really worked out with employment schedules and stuff.  You know how it is.  Maybe one day! 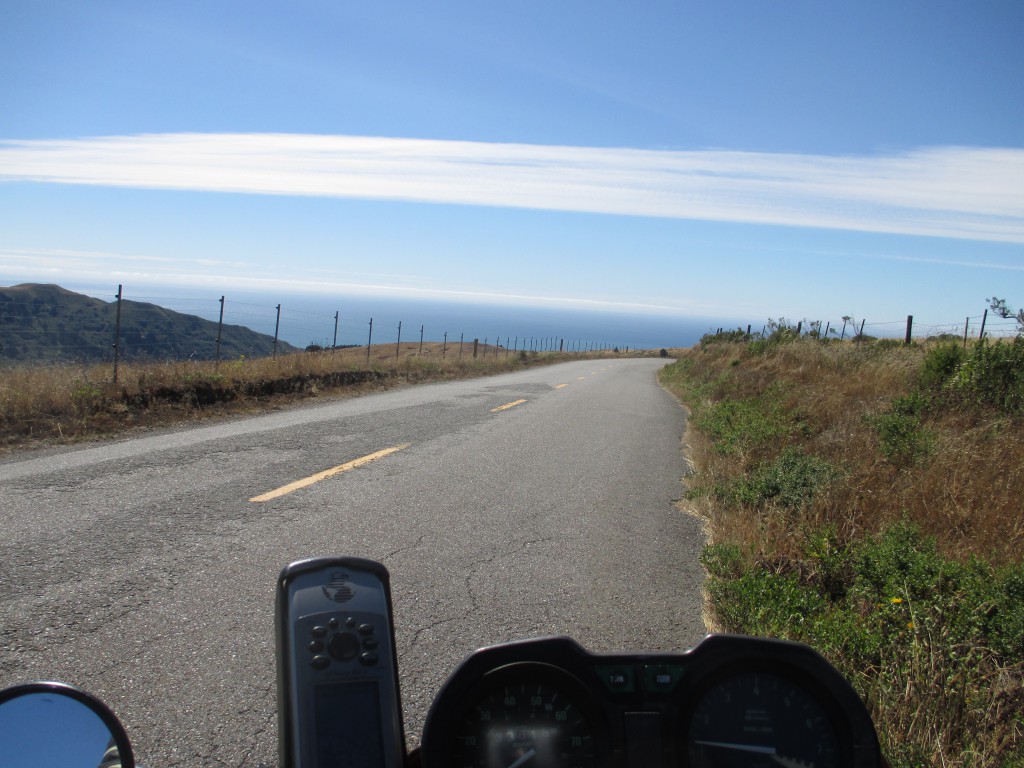 It was suggested to me that I take a slight detour and ride the Honeydew.  At the time I was pretty sure I rode this before.  Nope, I was wrong.  These roads are completely insane!  Using my GPS, I figured I could tale some dirt roads off the Honeydew through to Usal Creek, then jump back on CA highway

Nope.  I ended up wasting a lot of time riding in the wrong direction and hitting dead ends.  I’m okay with this because that just means more to explore later (on a different, more off-road capable motorcycle). 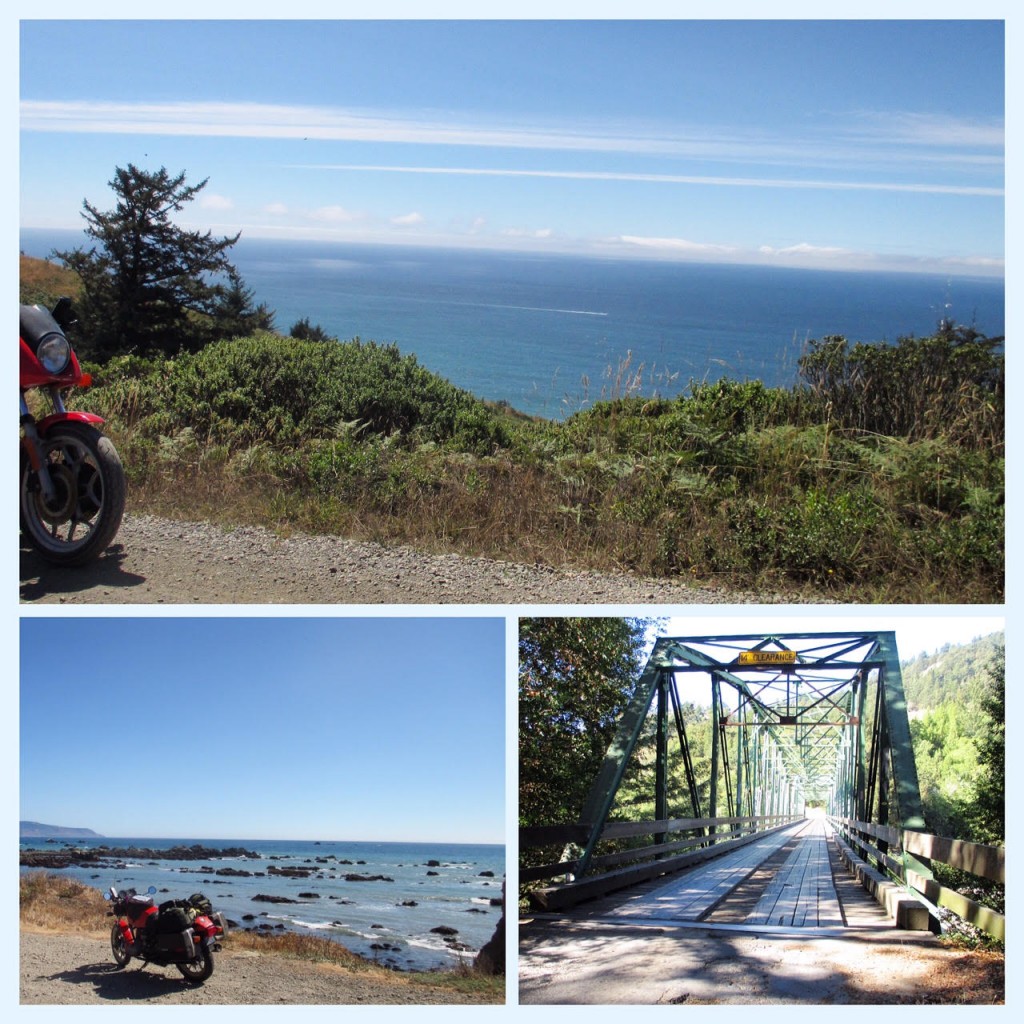 After I left the Lost Coast, I decided to stay on CA1 through Big Sur.  This was a mistake.  From my observations, there was a douche bag convention, where everyone who drives extremely high end sports cars drive up and down highway 1.  I’ve never seen a higher concentration of Lambo’s and Ferraris in my life (and I’ve worked in Miami Beach and Beverly Hills).  I didn’t take any photos, but I did manage to get my bike parked in a private little nook to enjoy a cliff side view of the Pacific for a bit.

At this point I ended up getting another hotel because it was still cold and I was bummed out about loosing so much time in Big Sur.  I woke up, rode though San Francisco to try and meet up with an old friend who ended up flaking on me.  Being bummed out, I rode to San Luis Obispo to meet up with another friend to drink a bunch of beer which was nice.  I rode straight from SLO to LA.  No photos.  That’s it!